Sossusvlei sand dunes lie to the South West of Windhoek in the Namib Naukluft National Park. Lonely Planet describe it as the Namibia of the picture books and the movies, “and it doesn’t disappoint”.

Sossusvlei is a huge ephemeral pan set amid infamous red sand dunes as high as 325 metres. This is part of the Namib desert which stretches some 2000kms between South Africa and Angola. There are some 32,000 square kilometres of sand and are part of the oldest and driest ecosystems in the world.

I take the three day tour option from Chameleon Backpackers Lodge which costs N$3850 with a N$600 single person supplement. Proof of travel insurance is required. Food and accommodation are provided and the only additional costs to the traveller is water and soft drinks. Tea and coffee are provided after each meal. Luggage is limited to 15kgs per person. Passports are essential to take, as indeed proof of travel and medical insurance. It is recommended that you bring the following:-
• Neutral coloured casual clothing
• Stout shoes
• Jumper
• Flashlight
• Sunhat
• Towel
• Sunscreen
• Sunglasses

The vast sand dunes change both colour and shape during the course of the day, casting interesting shadows in the early morning and evening. I’m particularly keen to view the night stars with zero light pollution.

Day One
It’s some 350kms drive down from Windhoek to the National Park and we depart at about 11.40am with Beanie, our guide, and three pairs of travellists. Taking the road heading south, our first landmark is Heroes Arch, a large monolith which pays tribute to the Independence movement. Controversially it cost hundreds of thousands of dollars, using imported materials and built by predominantly Chinese builders. The straight road is heads on down underneath the railway bridge forming what is known at the “Window to the South”. 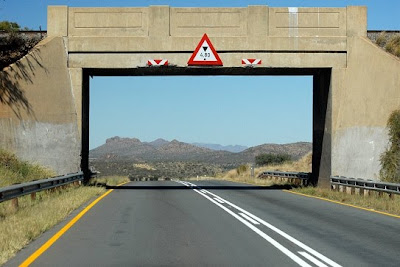 the "Window to the South"

The road is paved all the way to some 87kms to Rehoboth. This colourful settlement is predominantly made up of some 15 - 20,000 Barstars – people of mixed decent who became outcasts from both the White and Black communities. Indeed there was a strong claim by these residents back in 1974 for their own independent state, but the situation has improved somewhat. There is a local spa which seems to be used exclusively by locals. They are famed for their excellent farming skills.

From here we take the unsealed road, the C24 first via Klien Aub (Small Fountain) an old gold mining town with just a few buildings and then onto Rietoog, a tiny community of Nama tribe. After the turnoff to Bullsport we take the C14 and then right on the D854 into the Namib Naukluft National Park . Almost immediately we see a family of warthog, gazelle and three large ostriches.

At about 4.50pm we stop for the night at Desert Camp about 6kms from Sesreim. Desert Camp was recently taken over by Angelina Jolie, Brad Pitt and their entourage. A cool choice methinks.

The evening light is gorgeous and we enjoy lamb chops, beef sausages and a Greek salad for dinner. The night sky does not disappoint. With zero light pollution and a cloudless sky, the freckles of light are simply amazing.

Desert Camp - our base in the park

It is a 5am rise to ensure we can be one of the first in line to enter the park at Sesriem. Although the gate says the park is open from sunrise to sunset, (traditionally at 6am), by 6.15 a huge tail-back is getting more impatient.

take a balloon and avoid the queues - if your rich!

Sesriem is the gateway to Sossusvlei where a park permit is required, and it’s some 65kms on to Sossusvlei along a paved road. Most vehicles stop off at the famous Dune 45 for sunrise, but Beanie has got other ideas and heads over to Deadvlei stopping on the way to watch the incredible changing light over the sand dunes. The dramatic swathes of light cast contrasting colours and shadows which change visibly every few moments and make for the most surreal and Dali-esque landscapes. 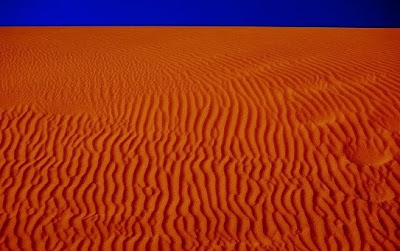 winds creates an ever-changing landscape on the dunes

It’s a some 5 and a half kilometers hike across the dunes from the car park to Deadvlei, where the images become even more surreal. Water disappeared here some a long time ago and skeletal trees remain almost undamaged for some 600 years. I spend a good half hour walking round this parched arid area, before we return to the vehicle and head further into the park up to Sossusvlei. There’s time for a bracing 25 minute walk up the 110 metre high sand-dune, as the light continues to strengthen, flatten out the shadows and the colours change to a pastel yellow. It only takes 5 minutes to return to the bottom. 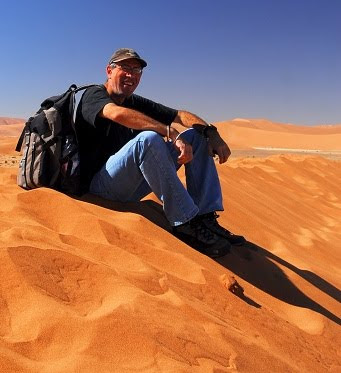 Aubs on the summit

After a hearty brunch, watched eagerly by a lone jackal, we head out of the park for an ice-cream and cold drink break via Dune 45. The wind has picked up and the sands are blowing fiercely of the ridge. Most of the dunes are numbered for scientific research and most are off-limits to park visitors. Dune 45 must be one of the most photographed sand dune in the World. 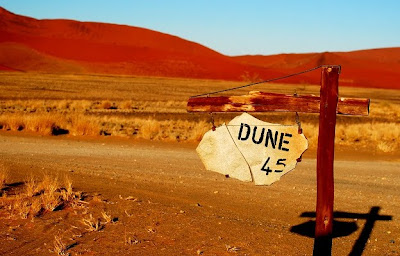 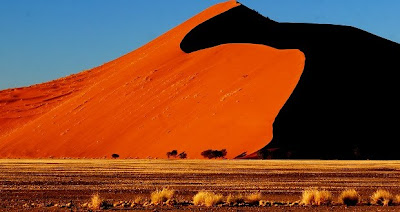 We head back into the park again, this time heading to Sesreim canyon, a mere baby at about 65 million years. After all the sites from the morning shoot, it is a little disappointing. 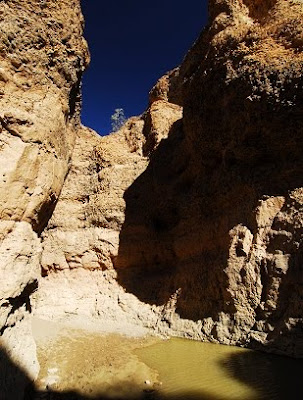 Fortunately we are rewarded with a sighting of an oryx, the national symbol of Namibia. 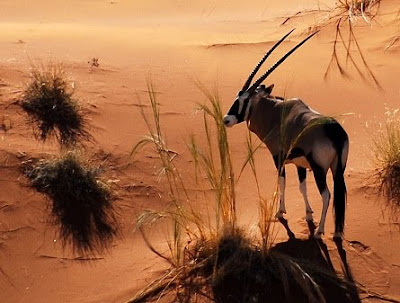 oryx in the dunes

We’re back at Desert Camp by 4pm, but i’m keen to explore some more, so I take a short hiking trail around an island rock. I stroll real slow and am rewarded by one of the most stunning sunsets I have witnessed. 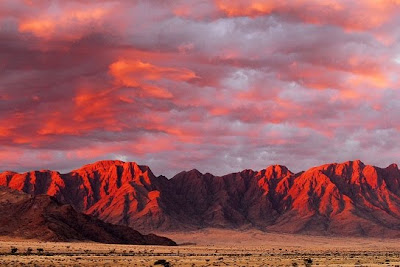 Despite the heavy clouds, they pass quickly and by the time our barbeque chicken is ready at 7pm, the skies are alight with stars again.

It’s always sad to say goodbye to such a beautiful environment, so it is with a heavy heart that after a 7am breakfast we head back to Windhoek, this time passing through the tiny settlement of Solitaire, named after a dead tree. The apple pie from the bakery is awesome, and the bakery is run by a real character who came to town 20 years ago to visit his sister and never left. The roads are clear and we are back in the metropolis by 2pm. 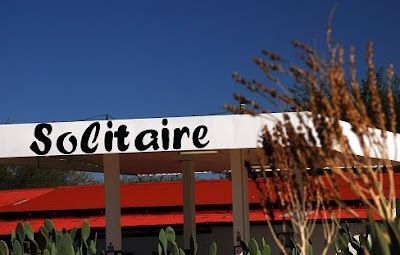 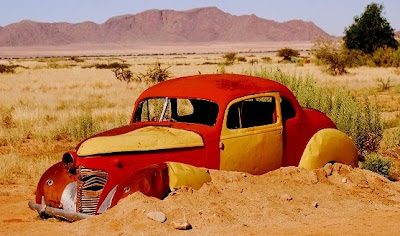 graveyard of the car - Solitaire

An amazing safari that really is a Must Do for visitors to Namibia.

Editor Addition: Yes my photos are cool, but they are copyright. These and more photos can be found by clicking here.
Posted by Mountain Man at 10:02 PM