Rise Up for Tibet

Posted by Mountain Man at 11:48 AM No comments:

Probably the most remote region of India, and part of the Tibetan plateau, this valley is cut off from the world for over six months of the year (mid-October to July). Averaging an altitude of 4000 metres this baron area is almost exclusively inhabited by Tibetans. The lunar landscape is dotted with small gompas (Tibetan temples) with some of the most special and historical thankas (religious paintings) to be found in the world. It is also the hunting ground for the always elusive snow leopard.

We packed up armed with cameras and plenty of winter woolies. I haven´t been here for over 10 years and was curious to see what changes have taken place. However we have now been forced to revise our plans. A group of Belgium travellers were air-lifted out after a series of landslides in the region, as was the Kamapa Lama! Six local shepherds have disappeared in four metre snow-falls. Feeling bitterly disappointed that this trip will now have to be postponed until next July.

The Dalai Lama will be giving another lesson over the next four days so it will be some redemption. Can´t believe that lessons will now take precedence over travelling!
Posted by Mountain Man at 11:28 AM No comments:

Don´t Wait For Me

Don´t worry, Buddhist philosophy states we will all reach enlightenment; a state of nirvana. Doesn´t that sound reassuring? Unfortunately most of us are many life-times away. Whether we like it or not, we are all on the learning path. Rather than stumble around, the Dalai Lama was preaching the importance of using a road-map. We must be open-minded, and show an intellectual capacity and interest. Being an aquarian and fire horse, I often travel without a map, enjoying a different path. I´ll get there in my own time. Please don´t wait for me!
Posted by Mountain Man at 3:09 PM No comments:

monks congregate after the teachings 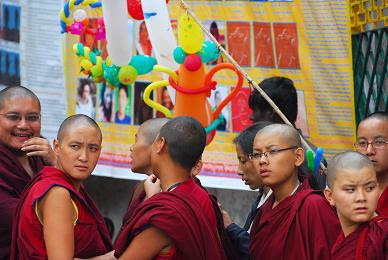 Posted by Mountain Man at 2:59 PM No comments:

His Holiness the Dalai Lama

The Dalai Lama is back in his adopted home town to deliver teachings to a group of Singaporean Buddhists. Kemmy is clearly very excited about the prospect, although knows no-one coming over. This is a fairly common event whereby he receives funding for the Pro-Tibetan cause for his lessons. As a spiritual leader for the Tibetan people he needs wide shoulders to carry this heavy burden, not least due to the global travelling he undertakes to promote the Tibetan cause. Now aged 73, he was taken to hospital last month for stomach problems brought upon by exhaustion.

Mcleod Ganj fills up with a wide variety of disciples to partake in the teachings. Live translations are given in English, Spanish, Japanese, Chinese, etc. and most of the students are armed with FM radios to tune in to these.

Last month he was giving teachings to a Korean delegation. Between each lesson, HHDL walks through the throngs. He stops right in front of me to have a conversation with a very wrinkled and old Tibetan woman. On completion he walks vigorously down the aisle and stops in front of a European woman on the opposite side. She immediately breaks down to uncontrollable tears which he attempts to subside with little success. He moves with vigour and vitality, and whatever your religious background, he clearly has a serene and enlightened aura around him.
Posted by Mountain Man at 7:55 AM No comments: 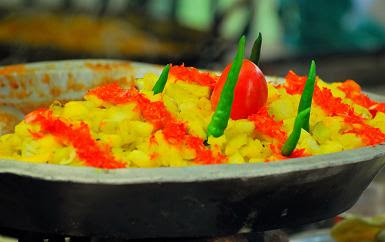 Posted by Mountain Man at 7:42 AM No comments:

The End of the Monsoon Fair

Mcleod Ganj traditionally celebrates the end of the monsoon with a street market, food fair and dangerous-looking fairground rides. Street vendors selling a wide variety of plastic toys, jewellery and kitchen utensils. The assortment of few products are beautifully displayed although distinctly unhygienic. Outsiders descend on the village for the festivities cluttering the main street. The fair has now been and gone which is more than can be said for the monsoon.
Posted by Mountain Man at 7:39 AM No comments: 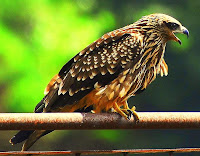 I have come to take eagles for granted. Along with crows, they are the most populace bird in the valley. Graceful and sharp they are gorgeous to watch. However this morning I have been watching a whole herd of about 10 soaring and swooping around our balcony playing “chase the crows”. Too fast to photograph unfortunately.
Posted by Mountain Man at 8:28 AM No comments:

I saw Tenzin Palmo in the streets of Mcleod Ganj. It was pretty weird in the sense that I only saw her last week, as the subject of the documentary movie “Cave in the Snow” which tells the story of this famous nun who lived in retreat in a cave in Lahaul for 12 years. (I would never had recognized her had I not recently seen the film). Growing up in the East End of London as Diane Perry, she left to India at the age of 20 and received tuition from a high lama. In the documentary Tenzin Palmo was asked what had she learnt from the experience? She said that it was the only way she could really get to know herself. When we are part of a societal relationship, we are always playing a role; a friend, confidante, an associate, a work colleague, etc. It is only when one is confined to oneself that these “roles” can be fully eradicated and we can get to understand our real self. 12 years wasted? I think not. Fancy living in a desolate cave in the middle of a freezing cold desert for more than a decade? Probably not.
Posted by Mountain Man at 7:19 PM 5 comments:

Posted by Mountain Man at 6:08 PM No comments:

We´ve been here in Mcleod Ganj for well over month now. The monsoon is now "officially" now finished and the days are now, in general, much warmer and dryer. Just as well as it was all getting somewhat swampy. Get the feeling we should have done this years ago.

The apartment is compact and bijou with outstanding views across the valley and we are very much enjoying the tranquility of the place.
Posted by Mountain Man at 5:43 PM No comments: