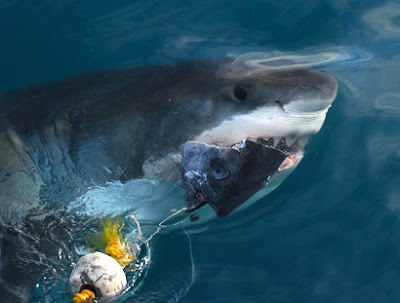 I am a believer in confrontation of one’s fears.

After a near death climbing experience at Breen Down in UK, i had some serious problems with heights. Throwing myself off a bridge in Queenstown, New Zealand for a bungy jump helped.

After watching Jaws on its release as a kid, it took several years before i felt comfortable entering the ocean. Even the sight of small reef sharks whilst diving, regularly caused me to hyper-ventilate.

However, it is time for me to confront my fears. 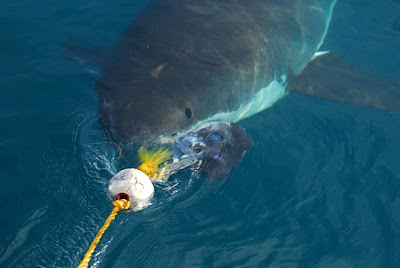 Situated 2 hours South East of Cape Town is Gansbaai, which is the main jumping off point for a Great White shark encounter. Some 10kms off-shore lies Dyer Island and Geyser Rock which forms what is known as "Shark Alley". Attracted by the Cape Seals as well as some 45 smaller shark species, this area is frequented by passing Great White sharks.

There are several operating outfits that offer both cage and boat viewing, and based on price I opt for White Shark Ecoventures. 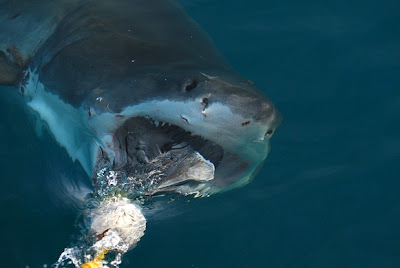 Many visitors complain of particularly rough seas, but after two fine days of weather, this is not a problem and conditions are near perfect with a surface temperature of some 18 degrees and the visibility is about eight metres.

The boat anchors and with 5 minutes we see our first shark circling from the boat, Chub is thrown overboard and a tuna head is slung overboard as bait. 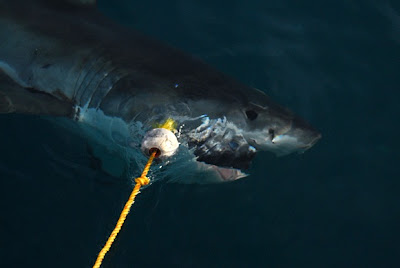 The cage holds five people, and with about 25 people on board there is a waiting queue. Nonetheless, even in a wet-suit, I immediately feel the coldness entering the water. The cage stays at the surface and we are asked to wait for instructions from our Divemaster.

Using a weight-belt he asks us to go down as a shark approaches. My eyes scour the waters. These big beasts are real fast and one blink and you can miss them. Some come real close to the cage, eyeing us carefully, and occasionally we have them bashing the cage ferociously with their tails. 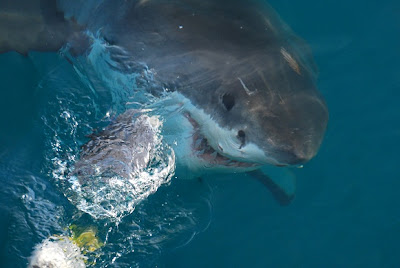 Almost all the Great Whites encountered are juveniles and female, as they tend to be the more curious of the genders. They are between 2.5 – 3.5 metres. However, we are particularly lucky to see a 4.5 metre adult male. After two sessions in the cage and some 3 hours we have indeed been fortunate to see at least 8 individuals.

The trip, including snacks, drink and two meals costs ZAR995 booked through One World Tours on Long Street. Worth every rand!

During Southern Right whale season (July – September/October) they also do whale-watching sessions at nearby Hermanus.

The following images were taken on a cheap disposable underwater camera. 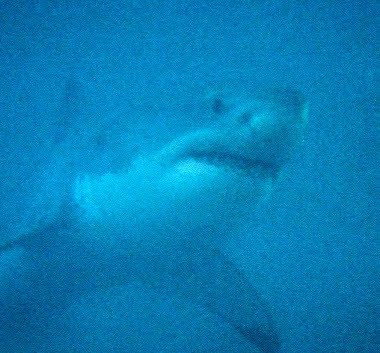 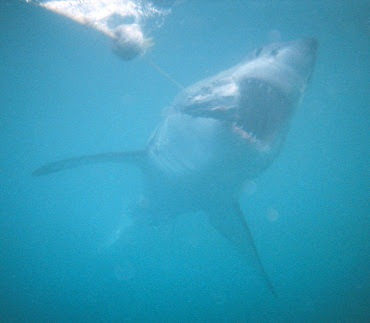 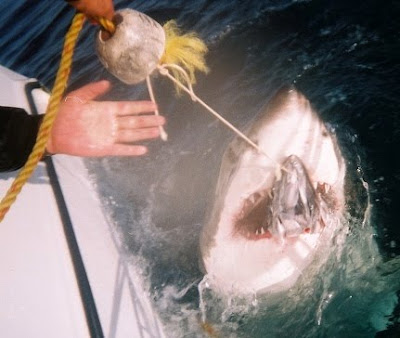