The Ngorogoro crater is a conservation area and a UNESCO World Heritage Site situated 180 km (112 miles) west of Arusha in the Crater Highlands area of Tanzania. The conservation area is administered by the Ngorongoro Conservation Area Authority, an arm of the Tanzanian government. The crater is one of the World’s largest volcanic calderas.

The volcano collapsed some 2 million years ago forming a natural amphitheatre for wildlife viewing. Being quite small inside the crater, just some 100 square miles, it ensures a huge density of wildlife, although there are no giraffes or crocodiles to be found.

Bordering the Serengeti, it is an amazing ecosystem containing its own biospheres including lakes, forests and plains.

The wildlife viewing is exceptional and brings you up close and personal like a National Geographic documentary.

Rather than be descended upon by the safari touts, my hotel in Arusha passes me to Jack from Lasi tours. With the elections, there are not too many options going anytime soon, so i join a group who have just completed Arusha National Park and given a guide to meet them at Panorama Safari Camp close to Mto Wa Mbu. The camp is very basic and the toilet facilities swampy, festering and a breeding ground for mosquitoes. The Black Tiger Acrobatic team perform nightly in the restaurant.

The three member tour party include Johann (South Africa), Tony (Germany) and his Tanzanian girlfriend Esther. They arrive into camp somewhat disgruntled having just avoided a serious crash and spent three hours at the side of the road having broken down; it is all looking rather pessimistic. They demand the guide/driver take the Landcruiser in for repairs to ensure a smooth trip to the crater.

The park opens it's gates at 7am so breakfast is taken at 6am. However by 8am there is no sign of the promised new vehicle and we all fear the worse. Texts and calls are made by all of us trying to get things going. By 8.15, Salim our guide/driver turns up in a second jeep, which then refuses to start and we end up departing by 8.30 in the original Landcruiser.

Arriving into the park however, and all is forgiven. The drive up to the crater rim (at 2340m – my highest point in my journey so far), is great and entering into the crater itself is simply stunning, being greeted by herds of wildebeest and zebra, with warthogs foraging in between.

A black rhino is spotted, but unfortunately it is just a small blob under a tree about a kilometre away from the road.

Assorted birds, including flamingos, bustards, ostriches and black kites are easy to spot along with several species of antelope. 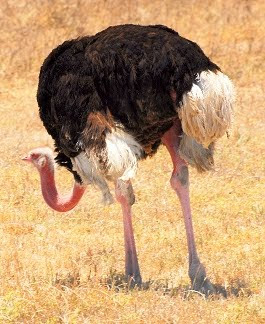 Since not spotting any lions on my safari in Etosha (Namibia), i know exactly what i am after on this safari experience. There are over 60 lions in the crater and i am told we will have sightings, but after almost an hour and a half, i begin to fear the worse.

However, looking across the plain we suddenly spot two in the undergrowth and i am ecstatic even if i can’t get a decent photograph of them at such a distance.

A half hour later and we see some eight vehicles parked at the side of the road and we know that there is something very interesting going on in front to us. A lioness is stalking a warthog watched on by two juvenile males who are happy sitting serenely by the wheels of the jeeps. We stare engrossed although no kill is made, and i am dumbfounded at how non-plused the lions are from the human voyeurs.

The Beast works overtime as i burn through my memory card. I lose all track of time as we sit engrossed, before finally moving on. Wikipedia notes there are concerns over lions’ well-being due to the lack of new blood and all the lions are genetically too close to each other to sustain a healthy population. 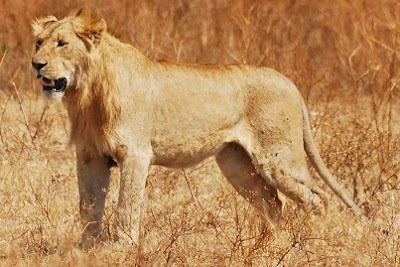 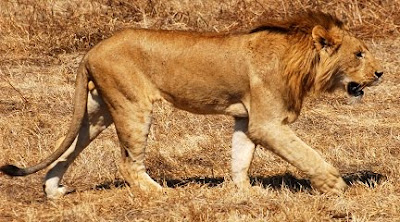 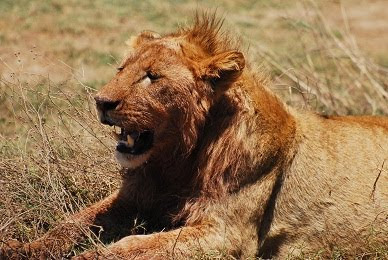 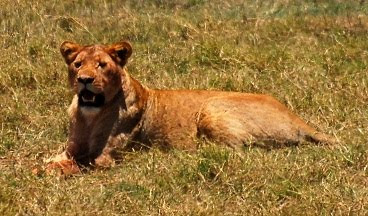 We picnic by the side of a lake full of hippos wallowing about, with black kites swooping in looking for easy tourist oicnic pickings.

The afternoon is no less dramatic with a further three lions spotted and a stretch of road teeming with zebra inter-dispersed with wildebeest. We also enjoy a very close encounter with an elephant. Only male elephants live inside the crater, with the females and youngsters habiting the crater rim and only coming down into the caldera to mate. 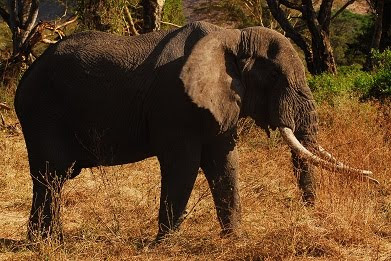 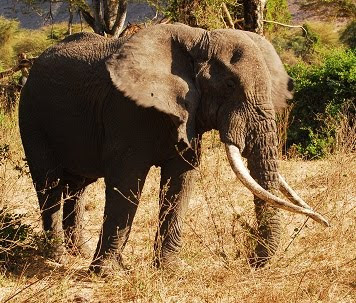 The day ends with a moment of great beauty. A female hartebeest has literally just given birth and we watch absorbed as she licks her foal and it takes its first tentative steps tottering on its unfeasibly long legs. 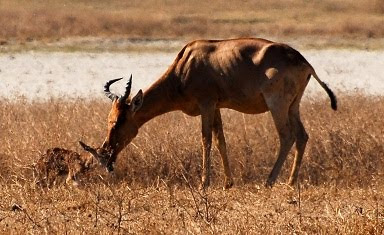 Unfortunately the gates close by 6pm and it is time to leave to the park. An incredible day of wildlife viewing nonetheless.

I loved Etosha in my foray into Namibia, but Ngorogoro is nothing short of superb. It is a must on any itinerary into Tanzania. 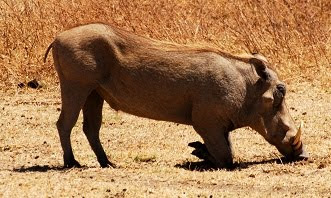 a warthog roots around 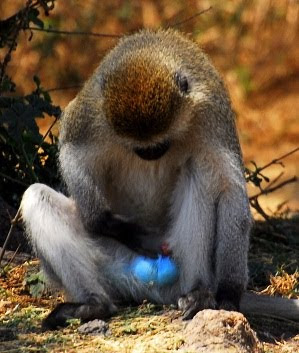 the Vervet monkey enjoying a good old scrtach of his famous blue balls
Posted by Mountain Man at 9:28 PM